Cooling Tower
Cooling Towers
A Cooling tower systems work by using water to extract waste heat from a system and ejecting it into the atmosphere primarily through evaporation. The three key components of a cooling system are the cooling tower, recirculating pump, and heat exchanger. Water first passes through a heat exchanger where it absorbs heat. The water is then distributed over the top of the cooling tower where air travels past the hot water causing a portion of the water to evaporate. The heat is transferred from the water stream to the air stream, raising the air′s temperature and its relative humidity to 100%. This hot air is then discharged to the atmosphere, resulting in a cool water stream. The cooled water from the basin is then pumped back through a heat exchanger and the cycle repeats.

Common applications include cooling the circulating water used in oil refineries, petrochemical and other chemical plants, thermal power stations, nuclear power stations and HVAC systems for cooling buildings. The classification is based on the type of air induction into the tower: the main types of cooling towers are natural draft and induced draft cooling towers. 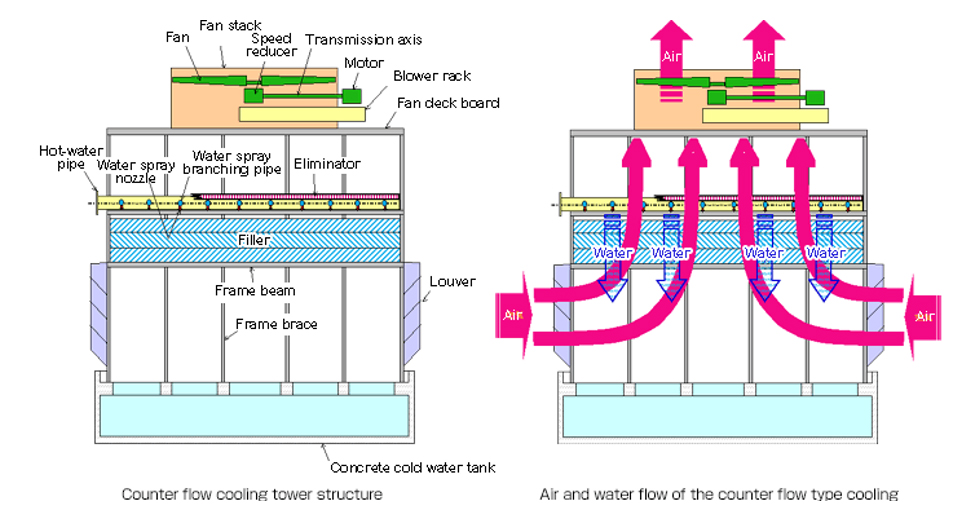 In a counter flow design, the air flow is directly opposite to the water flow. Air flow first enters an open area beneath the fill media, and is then drawn up vertically. The water is sprayed through pressurized nozzles near the top of the tower , and then flows downward through the fill, opposite to the air flow. 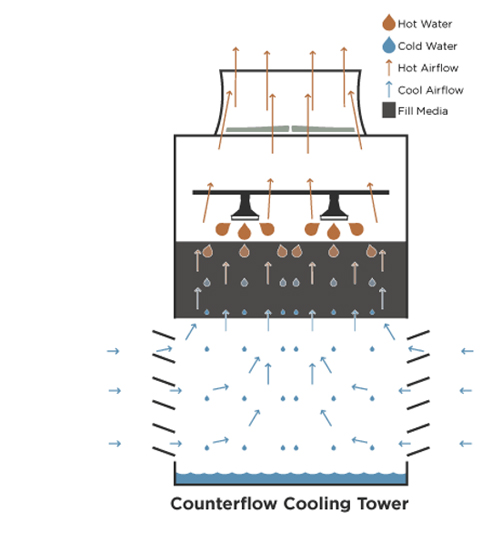 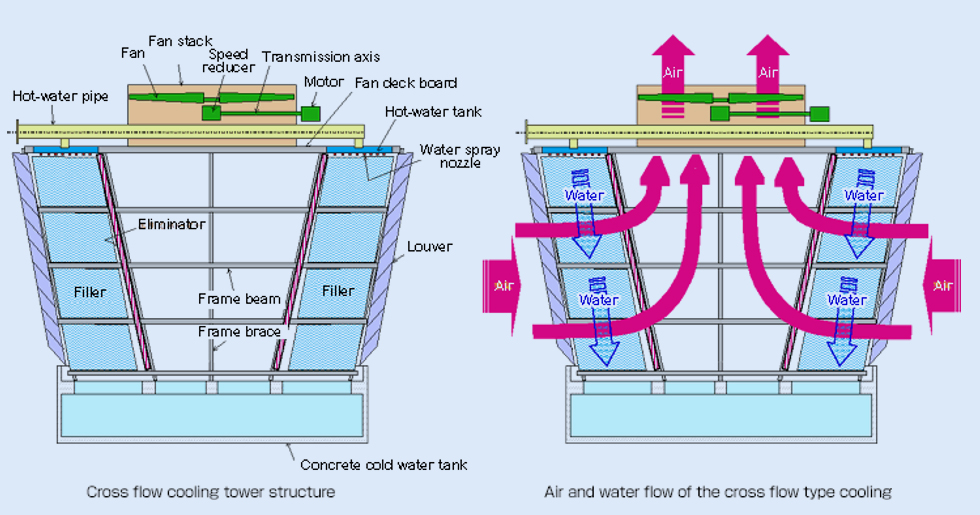 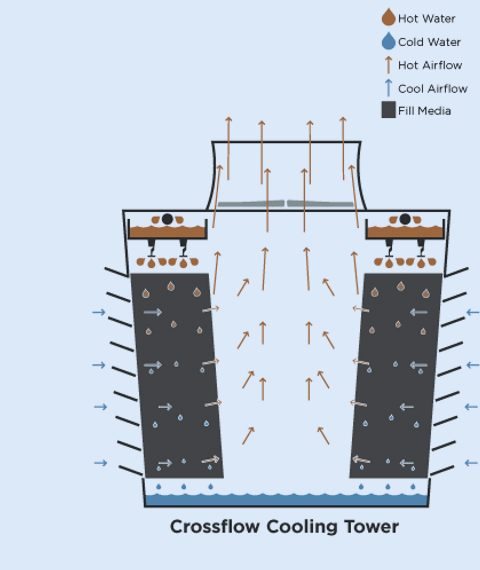 Plume abated cooling towers avoid the visible plume caused by condensed water.
Reasons to avoid a visible plume can be aesthetics, community relations,
regulatory requirements and safety.
The general technique is to mix the air leaving the wet section which is essentially at 100%
humidity (saturated) with dry hot air with low humidity from the dry section.

Cooling towers built from reinforced concrete (RC) have the longest live time of 50 years and more, provided regular maintenance. The erection of an RC-cooling tower is longer than for cooling towers with a FRP (fiber reinforced plastic) structure and have the highest erection cost. 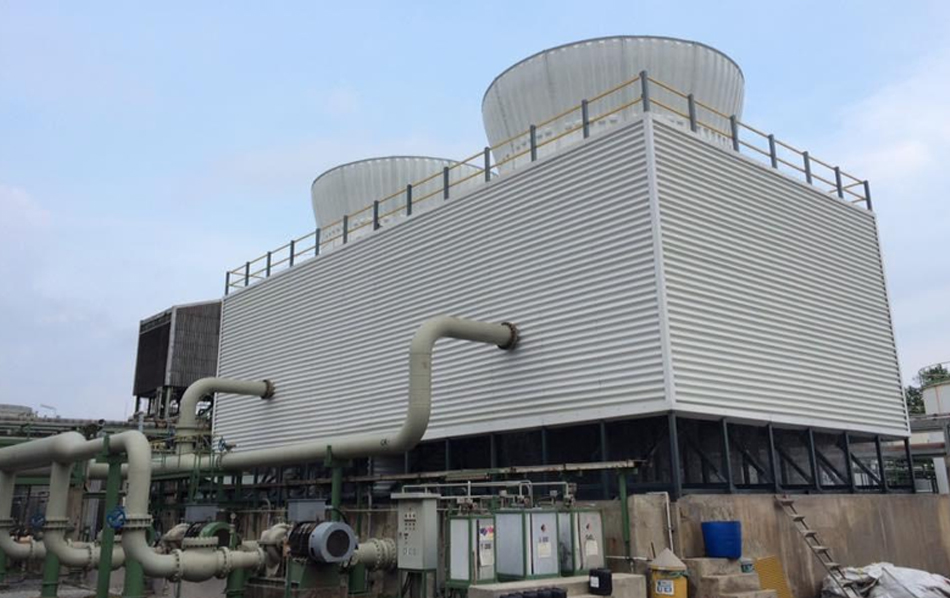 One advantage of a FRP structure is the short erection time. To save time FRP-cooling towers are quite often assembled near the final location and then positioned on the basin by crane. Other advantages are that damages for example after an earthquake can easily be detected and repaired. Also amendments to increase performance can executed relatively easy. 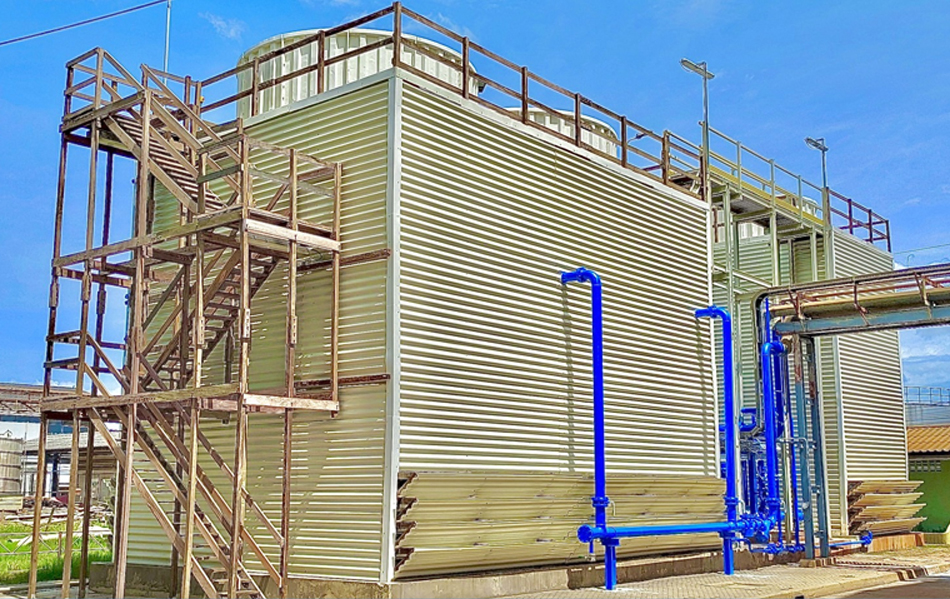 In the past cooling towers were quite often built with a wood structure due to costs. Today, wood is rarely used because of the short lifetime and relatively high wood prices 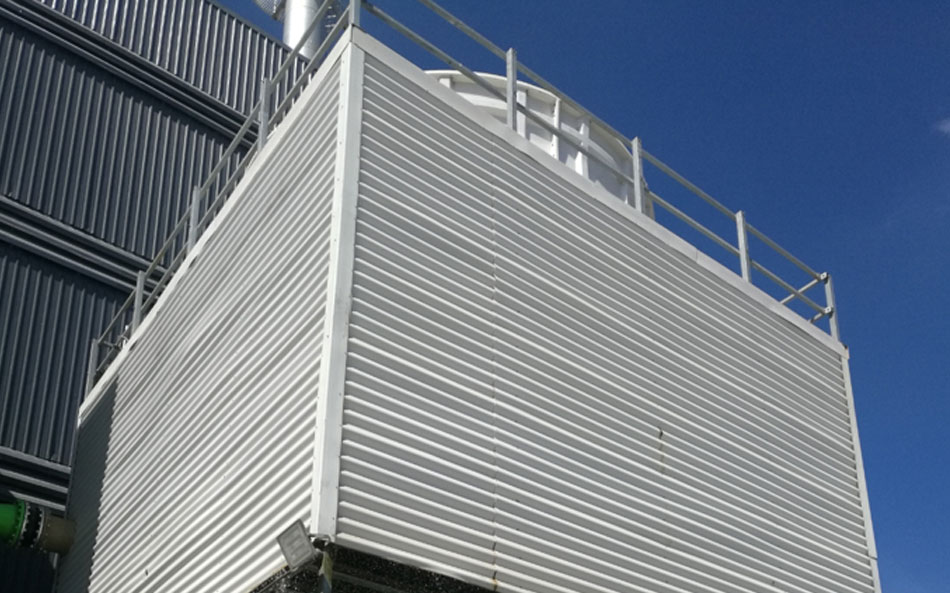 Steel structures, hot dip galvanized steel and stainless steel, are mainly used for small or packaged type cooling towers. Nowadays we mainly design and build this type of cooling towers in stainless steel to meet special customer requirements. The lifetime in HDGS the shortest of all possible structure materials.
Back